Yadav / Ahir Regiment Yadav / Ahir society is a society with a large community. There is no regiment in the Indian army of crores population and Yadav is coming forward for national security and security. This injustice has been running with Yadav for a long time. 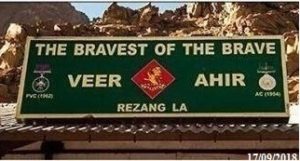 1) There are many regiments today in the Indian Army, which are made based on caste, community or region. For example, in the Kumaon regiment (based), Jat Regiment, Sikh regiment dispersed (based on religion/community), Rajput regiment (description) etc. Regarding the regiment based in all these castes/areas/communities related to nation/ territory/regiment (names), A large number of a community will be recruited. Why are not Yadav / Ahir regiments, why they have their own regiment in the Indian Army of some Yadavs? It is true that all castes/religion based regiments formed during British rule, and they are still playing their part in the Indian Army, the nation is safe. Not only that, but till now, Ahir did not get his regiment in the Indian army. When Yadav / Ahir jaws fight bravely for the people of the country.

3) In addition, Yadav will encourage Youth for Indian Army and Yadav’s involvement in the army will also increase. It is associated with Yadav’s employment, Poor Yadav, who lives for the country and keeps the spirit of a martyr, will also be beneficial for his family.
4) Participating in the military is a feeling of pride for a society. Besides this, the tribute to the ancestors of the martyred Ahir regiment and the martyrs of the Yadavs will also be found.

5) According to estimates, the population of Yadav population is the number of millions, it can be 15 to 18 million or more. Yadav names various names like India in other Ahir, Yadav / Yaduvanshi, Gwal, Gop, Iyer Rao, and Haryana, Uttar Pradesh, Bihar, West Bengal, Jharkhand, Rajasthan, Delhi, Andhra Pradesh, Karnataka, Tamil Nadu, and other states. It is, therefore, necessary that all Yadav get their “Yadav Regiment” rights.

6) Yadav is enthusiastic and honored about the Indian Army that is the largest army in the country which comes from a large number of this military personnel from the “Ahiral” area of Haryana. Shaurya Veer Ahir Rao Tula Ramji, Rao Gopaldev, always fought for the birthplace of such heroic heroism. In Azad India, all the Yadav who fought for the homeland, sacrificed, were honored with many medals.

7) Often Yadav soldiers received unnamed martyrdom because only people can know that the military commander of the regiment is killed. Nobody knows that he was a hero Ahir. Everyone talked about the bravery of an Indian Army and heard patriotic men in martyrdom and a song: 1962 is the Indian-China war, which is world-wide: bravery is to bring against many many Yadav soldiers in “Battle of Hai People” Victim Battle, Rejang heroic Ahiron. Show that. But in the song “No Sikh no Jat Maratha any Gurkha no madrassa ..” But it was said that Veer Yadav was lost somewhere. Therefore, the formation of the Yadav / Ahir Regiment is essential for the self-respect and power of the Yadav community.

Please respect the Supreme Court (India) for the formation of Honorable Prime Minister Shri Narendra Modi, Defense Minister Manohar Parikar G and Yadav Regiment and give them all rights to the Yadavs. It has already been mentioned that the Indian Army / Army leadership already existed in a number of castes, territories, community-based regiments should have no legal barrier to form a new Yadav regiment.
Earlier, Yadav’s regiment demand was raised from the Yadav community and, unfortunately, it has not been created so far. Therefore, the Prime Minister, the Defense Minister and the Honorable Supreme Court are requested to give hundreds of thousands of Yadav their rights. Yadavs and Yadav leaders (social and political) have requested to contribute their contribution together on the issue of Yadav Regiment. Support this application as long as the regiment does not have to participate in the military, it will be less. Yadavs will face the absence of the soldiers of the Yadavs and the future generations.